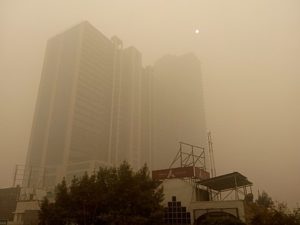 A dense toxic smog in New Delhi blocks out the sun. In November 2018, Delhi’s chief minister described the city as a “gas chamber”.

In New Delhi, air quality in recent years is a growing concern. The reasons are numerous, but every November a couple of extra ingredients are added to the mix which make the situation unbearable. One is the burning of the straw residue after the paddy harvest in Punjab and Haryana. Another is that the winter weather currents coming from the Himalayas are pushing the smoke all the way to Delhi where it lingers under the blanket of dust created by the construction boom. Consequently, pollution levels are reaching up to 20 times higher than the World Health Organization’s recommended limit (and according to some reports even higher).
BBC news article

In recent years, farmers have been blamed for this situation. However, when we look at some of the facts behind these accusations, we soon realize that it is not so straightforward to draw such simple conclusion.

In India, burning of crop residue entered the grain harvesting practices with the introduction of combine harvesters — machines that harvest, thresh and clean the separated grain at one go. A combine can cover an acre of paddy in one hour, while the same job using traditional sickle-harvesting and manual threshing/cleaning requires about 10 to 14 workers for a full day. However, the combine’s impressive time advantage comes with several unintended consequences.

Facts to keep in mind:
Combine harvesters are usually hired.
With the combines used in India , the stems are cut much higher and the rest of the straw is spewed onto the field. Sometimes within the following 10 days, the next crop needs to be seeded. The fastest way to remove the straw from the field is to burn it, which creates smoke, deplete nutrients and destroys microorganisms in the soil.
When the crop is harvested manually, it is cut close to the ground, and all of the straw is removed and utilized.

The reality of mechanization
Combines can be outfitted with different attachments that would help deal with the straw, but these attachments also add significantly to the operating cost.
One of the methods for dealing with the straw residue is the Straw Management System (SMS) which is attached to the combine harvesters. The SMS machine shreds the straw into small pieces and scatters it behind the tail end of the combine. The straw can be left in the field to decompose naturally, if the following crop is seeded by a “Happy Seeder”.
On one occasion, when a farmer was asked by one of our team members about why he still burned his field after using the SMS machine, he replied: “This is a great invention! Before, I had to hire 2-3 workers to maintain the fire. Now, since the straw is evenly spread, it takes only one match to burn the whole field!”
The Happy Seeder is a piece of equipment designed to plant the seeds in a field mulched with straw. This is a smart technology for those who can afford it.
Combine operators are already working in a very competitive market and are concerned that an additional cost will make their services unviable.
Governments are under pressure to provide subsidies for alternative technologies, but only time will tell who will really benefit at the end of the day.
Mechanization will be marching on to its own beat despite the fact that in the Global South, it is facing a very different reality than in the Global North. Often governments and NGOs are trying to make the big leap without giving thoughtful consideration to specific situations on the ground and the consequences of the applied changes.
Not enough attention is given to Intermediate Technologies which aim to provide affordable advancement alternatives with a much lower carbon footprint.

Social impact
Mechanization is perceived as a form of progress. However, it is also important to think about what happens to all the workers whose livelihoods depended on these jobs. When there is no work in the villages, they turn to cities. Often a man will go seeking new opportunities, leaving the family behind until he finds a secure place to relocate and settle in the urban area.
Economists say the market will adjust itself. We know that in our reality, the markets have their favourites and the poor aren’t among them. And every year, despite a relatively high level of unemployment in India, there is an acute shortage of labour in rural areas when the harvesting season comes around.
Every harvesting season, great numbers of farm labours from poor states of India take a journey across the country to find temporary employment in the breadbasket — Punjab and Haryana — to fill the void.

The Scythe as an Intermediate Technology alternative
Initially my intention to introduce scythes in India was to offer an efficient and affordable alternative to sickles. As such, scythes are now being successfully implemented for India’s harvesting practices.
Recently, with the stubble burning practices in the spotlight, scythes are being considered by some as an affordable, pollution-free alternative for small farmers.

The bigger picture for scythe in the Global South will be a blog entry of its own.